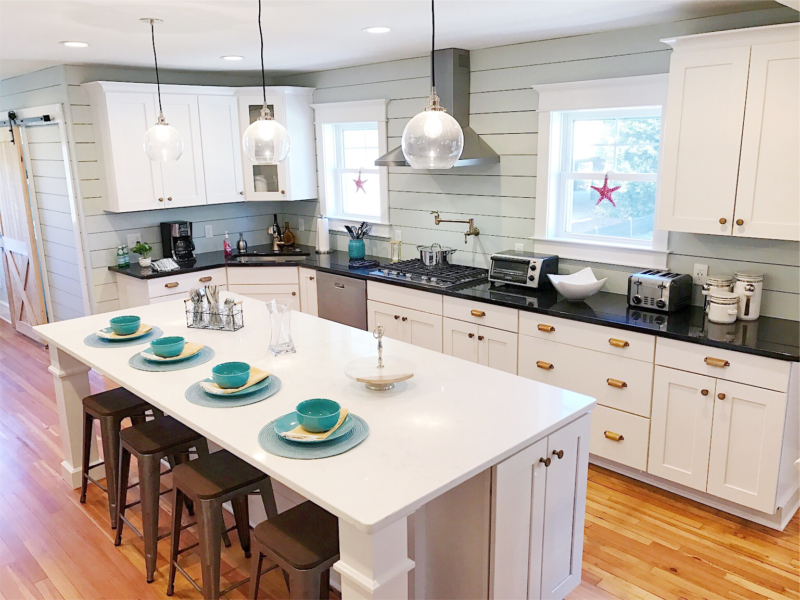 I cannot believe we’re already on episode 5 of Big Beach Builds! Is it just me, or is the season flying by? On this episode, I worked with homeowners Kristen and Ryan, who have a classic coastal house in Bethany Beach, just one block from the beach. Theirs is a story I can totally relate to – both have been coming to the Delaware beaches with their families for generations, and it’s important to them to keep that tradition alive and well. Unfortunately, they’ve outgrown their shared family beach home. Kristen’s parents bought their current house in Bethany Beach when she was just a child – even before her three siblings were born. But now that Kristen and Ryan have four young children of their own, they’re the ones who use the home the most often and have taken over the hosting, as well as upkeep, at the home. The couple is the only one of the siblings who has kids yet, but Kristen’s sister is hoping to have a family of her own soon. As it is, every bed is filled, every couch is claimed, and all available floor space is used for sleeping. If Kristen and Ryan don’t add more beds and shared living space to this house, they won’t be able to keep up their family beach tradition for much longer. Both Kristen and Ryan love this classic coastal cottage – not just for its authentic beach look, but also for the memories they’ve created in it. It was my goal to enhance their beach living experience by making the space more open to accommodate all the people they host, as well as create more bedrooms for guests. The couple’s home is one of the few original beach houses still standing amidst all the new construction popping up around them. Kristen and Ryan desperately wanted to maintain the home’s original charm, while still updating it with modern comforts and conveniences. Problem: The aesthetic of living/dining room area was completely outdated and closed off from the rest of the shared living space. It was also an awkward space for family gatherings, forcing some of the guests into the front of the house, and the rest in the back.

Solution: I started by opening up the wall between the kitchen and the dining room to make one cohesive, shared living space, which also enhanced the flow of entire first floor. Once the space was open, I used transitional furniture pieces, painted wall paneling, and other decorative touches to update the look of the home while still maintaining the traditional beach cottage feel that the family loved. Problem: The small, cramped, and outdated kitchen wasn’t conducive to cooking or entertaining. The awkward layout couldn’t accommodate more than two people working at the counters at once, and the appliances would hit into each other when opened. Additionally, the room between the kitchen and the back door didn’t really serve a purpose, and therefore went mostly unused.

Solution: Knocking down the wall between the kitchen and dining room really opened the floor plan and allows for better traffic through the kitchen from both the front and back of the house. This also allowed me to adjust the layout to fit an island, which provides extra seating and prep space. Kristen really wanted a wood backsplash to go with the paneling on the rest of the space, but I was worried about flammability issues with wood over the stove. Instead, I installed fiber cement board as the kitchen backsplash. Fiber cement board can withstand very high temperatures, giving it the functionality of ceramic with the look of wood. Lastly, I updated the whole space with modern appliances and fixtures, without sacrificing the traditional beach cottage look. With the completely open floor plan in place, the back nook is now an important part of the new kitchen.

Problem: The home’s outdoor shower was old and too cramped for most of the adults, like Ryan, who was constantly hitting his head when he tried to use it. With four kids under the age of eight, as well as a large extended family, there were a lot of beach accessories that need a home, yet nowhere to store them.

Solution: With such a large family, a proper mudroom was a must. The new space also houses the washer and dryer, as well as the family’s beach accessories, which keeps sand and dirt out of the main areas of the home. To address the shower issues, I moved it to the other side of the yard so it’s closer to the beach and makes sense for the traffic flowing in and out of the mudroom. I also ensured that the new shower could accommodate family members of any height. Problem: The old bathroom was functional, but sorely outdated. Oddly, it also housed the washer and dryer.

Solution: Kristen and Ryan desperately needed more sleeping space, so I started with the addition of another bedroom on the first floor. To make space for the new bedroom, I extended the house in the back by cutting into the outdoor deck (don’t worry – I still left the family plenty of outdoor living space!). I then turned the back bathroom into an en-suite bathroom for the existing first floor bedroom, and moved the laundry to the new mudroom. I also added a pitched ceiling with gorgeous new sunlights in the laundry room to let in all that summer sun and make doing laundry feel a little less like a chore. Problem: The family is continuing to grow, yet they’ve already run out of places for people to sleep. The adults were sharing rooms with the children, which meant no one was getting any sleep.

Solution: In addition to the new bedroom on the first floor, I added two new bedrooms and a new bathroom to the second floor. One is a proper master suite forKristen and Ryan so they can actually get some alone time when they’re at the beach. To continue the updated classic cottage feel, I added a wainscoting detail with corbels to add visual interest and function (it acts like a shelf!) to the bedroom.

See you on next week’s #BigBeachBuilds!

Save It or Sell It

Like a favorite childhood toy (or those jeans from college), sometimes we simply outgrow the things we love most. My clients, Eileen and Scott, were beginning to feel that way…Read More

Nowadays, when people think of the beach, they often think of purchasing a lot with a small, outdated home, knocking it down, and starting from scratch. And while I love…Read More

From Soaked to Saved

Many people fantasize about purchasing a run-down fixer-upper with great bones and turning it into the home of their dreams. And while doing so is often the best way to purchase…Read More

Nabbing a home right on the water is the ultimate dream for any ocean lover. And for homeowners Christine and Jay, that dream was finally a reality. But as the…Read More

There’s nothing more peaceful than falling asleep and waking up to the sound of water outside your window. As water lovers, our souls crave that connection, to be and exist as…Read More

Beauty and the Beach

Episode 7 of Big Beach Builds was one of my favorite builds of the season, mostly because of the amazing views we had the entire time from Margie and Scott’s…Read More

I cannot believe we’re already on episode 5 of Big Beach Builds! Is it just me, or is the season flying by? On this episode, I worked with homeowners Kristen…Read More

One of my favorite things about living at the beach is the truly outdoor lifestyle that it encourages and embodies. From the earliest hint of warmth in the spring to…Read More

Episode 3 of Big Beach Builds, “Captain’s Paradise,” could not have been more appropriately named. We filmed this episode in the middle of a severe storm that flooded much of the…Read More

The second premiere night episode of Big Beach Builds, “The Beach Gut,” was an incredibly unique project for one major reason – my clients, Jaime and John, didn’t move into…Read More

Bethany Beach holds a lot of wonderful memories for the Morgan family. They have owned a house in Bethany for more than 20 years, and they gather all three generations…Read More

South Bethany is a beach town that positively oozes charm and relaxation. Tucked within a network of little canals, South Bethany is both oceanside and bayside – a combination that’s…Read More

A Beach Bungalow with Style

Robin and Tom fell in love with Dewey Beach over a decade ago, and they’ve spent years vacationing there as a family. A few years ago, they purchased their very…Read More

This episode was extra special to me because the house I was working on belongs to one of my best friends! Leslie lives just a couple doors down from me…Read More

For Chris and Nancy and their four children, summers are for enjoying sunny days at the beach and evenings together at their beach cottage. They live in Portland, Oregon most…Read More

For my clients Sarah and Brian, life is very full at the moment. They’re a young couple with a growing family – a toddler, a newborn and two dogs to…Read More

Despite sitting only a half-mile from the ocean, Brian and Susan’s beach house didn’t look beachy at all. Its natural charm was hidden behind an overgrown yard, dark colors and…Read More

A Smart Space Plan for a Growing Family

There is a special magic to gathering together several generations of a family under one roof. For my clients Dade and Jodi, the beach home in Fenwick Island, Delaware that…Read More